The Feed the Future Innovation Lab for Fish is assessing the population ecology and distribution of invasive crayfish in Zambia and made exciting progress in March.

The team had a day-long workshop on invasive crayfish ecology with the Zambia Fisheries and Environmental Protection Department at the University of Zambia during Michael Rice’s visit, who is the project’s lead principal investigator and University of Rhode Island professor. The team also interviewed local fishers to get a better idea of where crayfish are in the Kafue Floodplain and Lake Kariba areas.

“About 35 people were in attendance at the workshop, including representatives from the department as well as the director of fisheries,” Rice said.

Rice; Marjatta Eilittä, a co-principal investigator for the project with Cultivating New Frontiers in Agriculture; Eva Nambeye-Kaonga, a co-principal investigator with the University of Zambia; and Gordon Mudenda, a professor of fisheries and aquaculture as well as the former director of the Zambia Department of Fisheries, presented at the workshop on crayfish biology and ecology.

“We discussed how the lack of the crayfish’s natural habitat, which is Australia and North America, affects the crayfish as well as how crayfish affect Zambia with it being an invasive species,” he said.

“There was discussion about collaborating with the departments at the University of Zambia in terms of identifying areas around the country where the crayfish exists. There are a couple of scientific papers from the years 2018 and 2021, describing the location of where the crayfish were during those times. We plan to use the information as a starting point in detecting the spread of crayfish around the country.”

Another goal the team met during the trip was meeting with 30 crayfishers. They conducted the interviews in the local language, using a questionnaire developed by Nambeye-Kaonga and Eilittä to gain information from the fishers.

“We gathered information about how they fish for crayfish,” Rice said. “They primarily use traps, so we asked about what kind of traps they use and if their traps could be improved. We also inquired about the number of people in their household and whether they ate the crayfish they caught, sold them, or both. These questions are helping us to see the nature of the fishery itself.”

The team noted there is a division of labor within the fishery. Men primarily catch the crayfish, and the women are the ones primarily selling them.

“It seems to be a family endeavor and a means of income,” he said. “The men do the fishing, and the women are converting those crayfish to money in the markets and alongside the roads. Also, it seems over the last few years crayfish have become more acceptable to the local population in terms of eating.”

The team’s next action item is to assess the crayfish by doing their own trapping.

“By looking at the size of the crayfish, we can determine how old they are and if they are at reproductive age,” Rice said. “If we get a lot of smaller ones in our traps, we can infer the fishers are having an effect on their population because the crayfish are not able to fully mature.”

The team will then use the data from their crayfish catches, such as measurements, to quantify the current fishing effort in Zambia.

“We can then make some estimates to whether the crayfishers are having an impact on the populations,” Rice said. “If not, we will have a better sense of what kind of effort needs to be made to control the population of crayfish. By fishing down the population effectively, we will be helping to protect the rivers and wetlands in Zambia that could be negatively affected by the invasive species.” 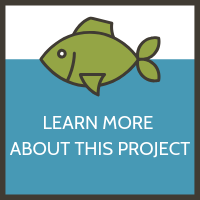