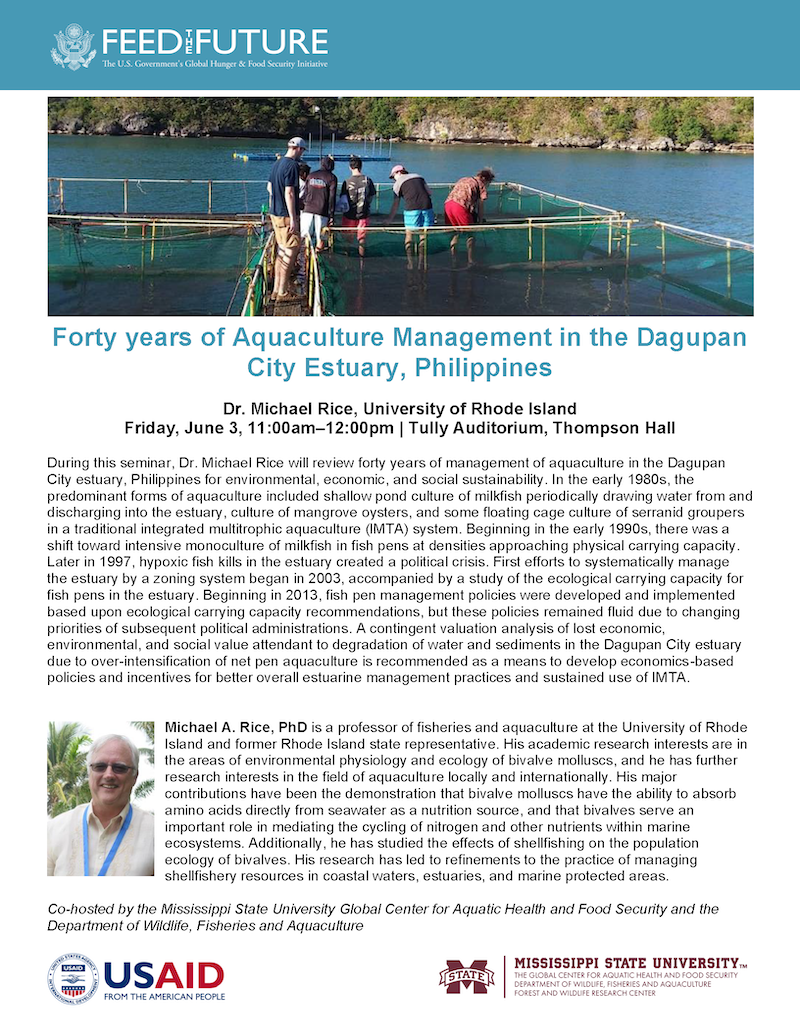 During this seminar, Dr. Michael Rice will review forty years of management of aquaculture in the Dagupan City estuary, Philippines for environmental, economic, and social sustainability. In the early 1980s, the predominant forms of aquaculture included shallow pond culture of milkfish periodically drawing water from and discharging into the estuary, culture of mangrove oysters, and some floating cage culture of serranid groupers in a traditional integrated multitrophic aquaculture (IMTA) system. Beginning in the early 1990s, there was a shift toward intensive monoculture of milkfish in fish pens at densities approaching physical carrying capacity. Later in 1997, hypoxic fish kills in the estuary created a political crisis. First efforts to systematically manage the estuary by a zoning system began in 2003, accompanied by a study of the ecological carrying capacity for fish pens in the estuary. Beginning in 2013, fish pen management policies were developed and implemented based upon ecological carrying capacity recommendations, but these policies remained fluid due to changing priorities of subsequent political administrations. A contingent valuation analysis of lost economic, environmental, and social value attendant to degradation of water and sediments in the Dagupan City estuary due to over-intensification of net pen aquaculture is recommended as a means to develop economics-based policies and incentives for better overall estuarine management practices and sustained use of IMTA.

Michael A. Rice, PhD is a professor of fisheries and aquaculture at the University of Rhode Island and former Rhode Island state representative. His academic research interests are in the areas of environmental physiology and ecology of bivalve molluscs, and he has further research interests in the field of aquaculture locally and internationally. His major contributions have been the demonstration that bivalve molluscs have the ability to absorb amino acids directly from seawater as a nutrition source, and that bivalves serve an important role in mediating the cycling of nitrogen and other nutrients within marine ecosystems. Additionally, he has studied the effects of shellfishing on the population ecology of bivalves. His research has led to refinements to the practice of managing shellfishery resources in coastal waters, estuaries, and marine protected areas.

Co-hosted by the Mississippi State University Global Center for Aquatic Health and Food Security and the Department of Wildlife, Fisheries and Aquaculture